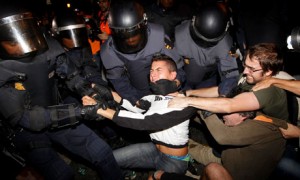 I hate to be the cop who crashes your party. I don’t want to be the storm that rains on your parade.

I have bad news for you:

I love CrossFit because it has taken my training and turned it into a daily competition with myself and others. For me it was nothing I ever thought of doing in my past training. Sure, I had to run distances for time or did x number of push-ups and sit-ups in a certain amount of time to qualify for my SWAT team, but I never thought about all of my training being based on a clock and moving pre-determined loads in certain rep schemes as fast as possible. CrossFit brought the challenge of trying to do each workout “As Prescribed” and as fast as possible. I fell for it head over heals (literally in some workouts).

At first, I moved like shit. I just wanted to get things done fast and then post my results on CrossFit.com to compare to others. Luckily, very early in my CrossFit career I hooked up with lots of the right people, and they called me on my range of motion. I learned real quick that “As RX’d” means “As RX’d”.

So now the 50 MPH winds at your Saturday BBQ at the park……..

Just because you attempt to do a pull-up, but half your reps don’t go chin over bar or your arms don’t extend all the way at the bottom, it is not a pull-up. If you have to throw a 20# wallball at a 10’ target, but the ball rarely reaches the 10’ mark, it’s not a wallball with a 10’ shot. If you load 225# on a bar, but squat to above parallel, it is not a 225# back squat. If you do a push-up in a true plank position, but never touch your chest to the ground, it’s not a push-up.

Do you see where I am going with this?

AN ATTEMPT IS NOT AN ACCOMPLISHMENT. Lot’s of crazy fuckers have attempted to climb Mount Everest. Many turned back and many others died trying. Only the one’s who actually made it to the top can claim that they accomplished reaching the summit. (BTW-Please do not die during any attempt to do a workout “As RX’d”…..that would suck.) When you turn an attempt into an accomplishment, you disrespect the accomplishments of others and lessen the excitement of when you truly do accomplish something.

Hey, it’s totaly okay to mess up a rep every now and then. But if you are a person who cares about that little “RX’d” being posted next to your name, take your game to the next level. Every now and then, ask your coach to keep an eye on your movement and let you know if it is not legit. Also, if you hear a coach tell you that your movement is not legit, listen to what they are saying! If I see you miss a rep every now and then, I am not gonna trip. But if you hear me call you out on your movement (especially more than once), I am seeing a pattern that I want you to fix. Pay attention!

Another thing you can do to improve your performance is film yourself working out. Back in the days when I was at my best in doing CrossFit (I used to be pretty good!), I filmed probably 75% of all my workouts. As soon as I was done, I would watch the workout again to count my reps and check my range of motion. Nothing worse than thinking you were badass only to find out you weren’t really so great afterall. I did this for probably three years straight. It made me much better at CrossFit because after awhile, I learned to make the no rep call during the workout rather than after the workout.